We had been doing exactly what Nora’s surgeon told us to do — enjoying our baby, living life, staying healthy and having fun.  She had had her regular follow-up appointment in April where she was x-rayed.  At that time, her curve had progressed, but only slightly. Her surgeon was happy and said we would check again in three months.  As we got ready for that next follow up appointment in July, I knew her curve had gotten worse.  As a mom, I just knew.  I could see it.  I could feel it.  BUT I truly believed it still wasn’t that bad.  I was as hopeful as her doctor was that we might not have to resort to casting – that by the time her curve was bad enough for something to be done, she would have been big enough for surgery.  I believed this so much, in fact, that I told Matt he didn’t have to come to this appointment.  I knew it was going to be quick, all would be fine and the doctor would send us on our way.  But of course, that didn’t happen.  As I sat there in the exam room with a very active, into-everything 13-month-old baby,  I felt the weight of the world come down on me as our doctor explained that her curve had progressed significantly to 58 degrees, and we needed to consider casting as a way of slowing this down.  I felt like I couldn’t breathe; I couldn’t focus on what he was saying.  All I could think about was  how much my little girl truly, deeply loved water and was drawn to water wherever she saw it — and how I was going to have to keep her from it now, not allowing her to experience the joy of playing in the bathtub, running in the splash pad, swimming in her dad’s arms at the pool.  I was wishing Matt was there and cursing myself for telling him he didn’t need to go and not to worry. 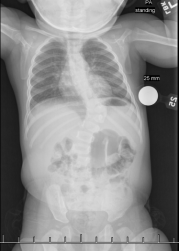 As I left that appointment, walking through the parking lot with my beautiful baby in my arms, I looked at her sweet little face and her big blue eyes and just broke down.  I didn’t cry — I sobbed and balled my eyes out.  I tried fighting it for her sake, but I couldn’t. I just couldn’t.  I needed one minute.    She looked up me at with this confused and concerned face and she reached out with her chubby little hand and touched my face.  It was her way of saying, “It’s ok mama. I’m gonna be ok.”

I collected myself, got her in the car and called Matt to tell him everything, and that I had scheduled another appointment the following week with her doctor so both of us could discuss casting in more detail.

At that next appointment, we talked about the pros and cons of casting.  Apparently, we wouldn’t even know if it would work.  While casting has been proven to actually straighten and ‘fix’ curves in many cases of kids with early onset idiopathic scoliosis, congenital is very different.  A cast is not going ‘fix’ a congenital curve — all it can do is try and slow down the progression of a curve or curves and buy time for a child to grow before surgery.  And casting doesn’t always even accomplish that. But our doctor felt confident that it might for Nora, so it was worth a shot.

Bracing, a slightly less daunting approach than a full cast, wasn’t even an option.  Our doctor explained that it’s basically been proven not to work with congenital scoliosis. He is highly trained in casting techniques and has casted many patients, and as I’ve learned through four casts now, casting is not only a science but an art.  No two casts are alike.  There are many bad casts out there, and I’ve seen some. It’s critically important to find a doctor who has a lot of experience and is a master at casting.   While we hated the idea of how upset Nora would be in a cast, Matt and I looked at casting as, “what did we have to lose?”  If we didn’t try it, chances were her curve would continue to quickly progress and we’d be looking at some type of surgery much sooner than we all would like.   Her curve at this point had already progressed to 58 degrees and she already had decreased lung volumes, meaning the curve was impacting her pulmonary development.   It’s funny how my views on casting and how our own reality changed so much that I was actually hopeful for the casting process.

We had a couple of weeks before we would be getting her first cast.  We spent as much time as we could at the pool, the beach, the splash pad, playing in the bathtub, water table – anything water related. 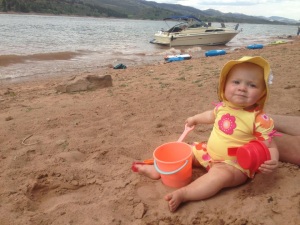 One thought on “Follow-Up Appointment – July 2013”