With the knowledge looming over our heads that there was a potential for Nora to have other abnormalities, we decided to schedule her tests sooner rather than later. The echocardiogram was pretty easy. The hardest part was trying to keep an energetic seven month old laying relatively still and relaxed for 45 minutes.  Matt and I were pretty impressed with how well we managed to do that.  We left the hospital that day knowing we were in the clear and her heart looked good.   One down, two to go.

The MRI was next, and we knew that this would be much trickier. Nora would have to be put under general anesthesia for that.  That’s scary for anyone…any parent… and especially for parents of a baby.   We had all our instructions and hospital prints outs about the procedure in hand, and we were ready to go early that day in January.  Withholding milk, water, juice and food from a 7-month-old for six to eight hours was torture in itself, but we were able to keep her distracted and happy leading up to everything.

We arrived at the hospital, got checked in and were taken to our room where we dressed her in a tiny little hospital gown that you would normally think was so cute.  She happily played with toys and hammed it up with all the doctors and nurses that came in to meet with us and check on her and explain things to us – again. 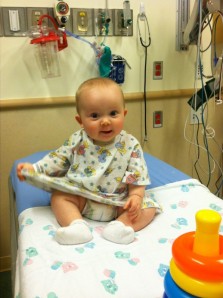 Before long though, it was time for her to go.  We gave our sweet baby great big, lingering-never-want-to-let-go hugs and kisses and watched as these nurses –these strangers — took her away.  I could feel the tears forming but was fighting them back as hard as I could, given all the horrible scenarios that were playing out in my head.

Matt and I sat in that waiting room for what seemed like hours and hours.  We didn’t say much, as we were both thinking things that you just didn’t want to say out loud.  We held each other’s hands tightly and prayed.  And prayed and prayed.

Nora was very sleepy and definitely drugged up when we saw her.  She had a tough time holding her head up but she gave us a few smiles.  We sat with her, rocked her and gave her juice while she fully woke up, which really didn’t take that long.  We got to leave about an hour later.  She was pretty much her happy silly self by time we got home.  Sigh of relief and major thanks to God!

Our doctor called a few days later with the details of her MRI report.  All in all it looked good.  No other abnormalities were detected besides the two discs at T-10 and T-11.  More good news!  And a lotmore thank yous to the Big Guy upstairs.